Location:Home>Cold Wave
Greece and Turkey was impacted by strong snow

In mid-Jan 2022, the low vortex over Europe was very active. Around the 24th Jan, the strong cut-off low vortex has formed over the Little Asia peninsula to the Black Sea which brought abundant water vapor from the surrounding seas as well as strong convergence (Fig. 1). It caused a wide range of rain and snow in the eastern Mediterranean and heavy snowstorms especially in Greece and Turkey.

Based on the FY-3D meteorological satellite data acquired on 26 Jan at 10：30 UTC, it is shown the snow was distributed in the central and eastern areas of Greece, Athens, Evia and Andros islands (Fig. 2), the estimated snow cover area reached 7000 square kilometers.

It is expected that in the next 10 days, there will still be low trough activity over Turkey, but the intensity will be obviously smaller, so there will be small to medium snow in Turkey. For Greece, there will be sunny weather followed by light rain or showers around 6th Feb. (Zhou Ningfang, Zhu Jie, Gao Hao, Wang Yi) 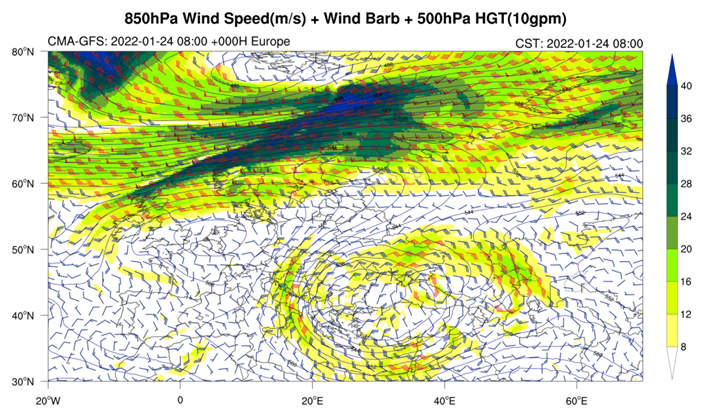