Starting from 10 Jan 2021, The first  SDS event occurred from the southern Mongolia and Western Inner Mongolia of China. SDS aerosol was transported and diffused to the central and eastern regions of China along the southeast direction with strong wind. The eastern part of northwest region, most of North China, Huanghuai and other places were affected by this large-scale SDS event, and the air quality of the places where they passed quickly deteriorated, The primary pollutant is PM10. The hourly concentration of PM10 in some cities exceeded 3000μg/m3 ,causing serious pollution. The SDS event has the characteristics of earlier occurrence time, wide influence range and high intensity. Data analysis shows that since 2000, there have been only five large-scale SDS event  occurred in January, and most of them occurred in late January, while the large-scale SDS event in early January is relatively rare. It is expected that 14-15, the above areas will also be affected by SDS event. In addition, the eastward transportation of SDS aerosol has also affected  Korea and other downstream countries. 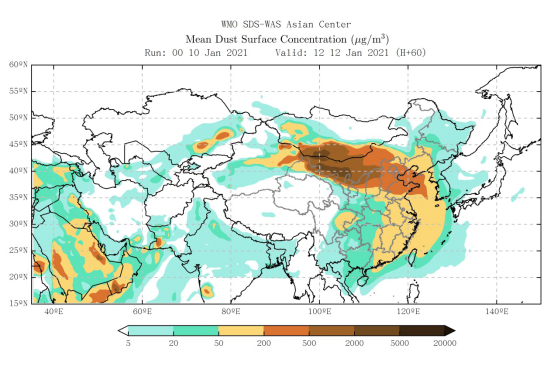